After you’ve been injured, most people are going to be approached by someone from the insurance company. That doesn’t mean that you have to reach out to them. It’s far more important that you receive medical attention, for example. In fact, that’s the very first thing you should do. When you are approached by an insurance company employee, there are several things you want to keep in mind. In this blog, a personal injury attorney in LA will go over some of those as well as ways we can help.

When possible, we recommend that you hire an attorney as early as you can in your case. There are many reasons for that, but one of the biggest is that it allows us to perform a thorough examination quickly. Evidence, even critical evidence that can show exactly what happened in your injury case could disappear over a given period of time. For example, should you be injured in a car accident, skid marks, dents in buildings and more kinds of physical evidence can be fixed, repaired or removed before we’ve had a chance to properly document them.

Witnesses can move on, too. The sooner you can bring us into your case, the better. Without that, the other side kind of gets a free head start. By no means does this mean it’s impossible to get you the compensation you deserve for your case, far from it. However, it can make it a bit more difficult. The last thing you want to do is make your case harder to win, so bringing in our attorneys quickly can help your case in a variety of ways.

When the Insurance Company Contacts you

They may cloak this by being exceptionally friendly, warm, empathetic and kind. While those can all be very welcome (particularly after you’ve been through a very difficult injury) it’s important to note exactly what they are: tactics. The insurance adjuster wants you to let your guard down. That way, they can get you to take so much less money than your case is worth. As long as you remember that the insurance company adjuster isn’t there to be your friend, and is instead talking to you so that the insurance company can get as much money as possible, you should be OK. 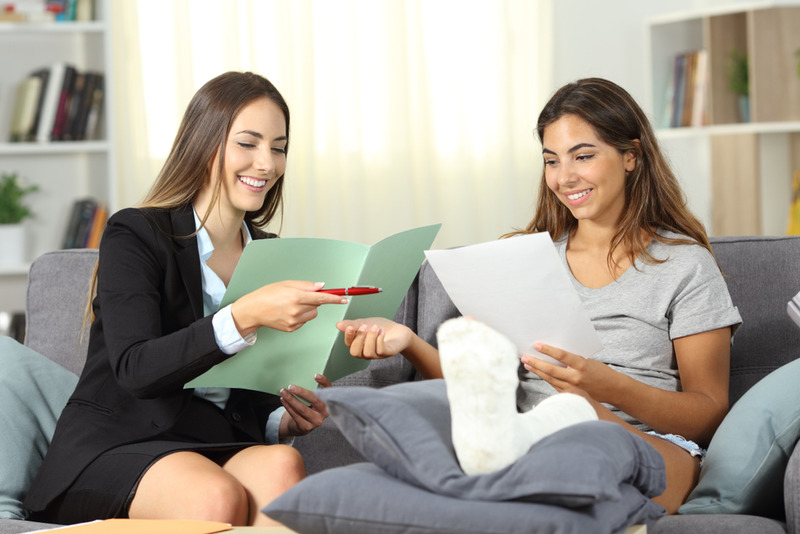 Often, one of the first tactics the insurance company adjuster may try is to get you to give a recorded statement. They may try to do this as soon after the accident as possible. When they present this to you, they make it sound normal. They’re just asking you a few questions, want your statement for their files – the entire thing can sound informal, friendly, and inconsequential. It is anything but.

One of the clearest ways this manifests is that they want you to make some kind of admission that could hurt your case as to how the accident took place.  For example, if you were in a car accident, they could try to get you to admit something that makes the case your fault, or makes you more culpable than you were.  This is just one of their tactics; it’s far from the last one.

An even more common tactic than that is to get you to say something that makes your injuries not sound like a big deal. An example: you bump your leg in a car accident. We say “bump” because really, you don’t feel much pain at all – just a little discomfort. An adjuster comes from the insurance company and you tell them exactly that: “my leg doesn’t seem too bad, just a little discomfort.”

Days, weeks and months go by. You go back to your regular life: work, family, that sort of thing. Then, one day, you wake up, and your leg is far worse than it had ever been. Now, it feels so much worse than it ever did in the wake of the car accident. Unfortunately, it’s very difficult to flat out impossible for you to do your job now. Naturally, you want more compensation from the insurance company. After all, the accident was worse than you thought. Now, you need to make up the money you’ll lose since you can’t do your job in the same manner you could before.

Then, the insurance company gets to play that tape where you said: “my leg doesn’t seem too bad, just a little discomfort.” No matter how pain you’re in, it will look like you exaggerated or even made up your injury. That doesn’t mean that you can’t get the compensation you’re due, it just means that it makes your case that much more difficult. That’s not what you want to do.

How to Deal with Adjusters and More

Also: a good way to head off the scenario mentioned above is to get yourself checked out by a medical professional when you’re injured. To be clear, we have a very low threshold for the definition of the word “injury.” You don’t have to be writhing in pain or anything like that. When we say “injury,” we mean “you feel slightly discomforted.” The reason being, “slight discomfort” right after an accident can lead to “debilitating injury” a short time later. The sooner a medical professional checks you out, the sooner you can begin the healing process.

You may not feel like you can pay for the services of a medical professional. That’s perfectly understandable – not many people have the money for a car injury just lying around. That’s where we can help. We know medical professionals who, like us, work on a contingency basis. That means that you don’t have to pay them up front. Instead, they’ll be paid out of money that you get from your eventual settlement. They can find out exactly how you were injured and then work with you from there.

Going through the process of getting an attorney is never easy, but it can be especially difficult if you’ve been recently injured. We want to make our office as open and welcoming as possible to you. That’s why we’ve made it simple to get set up with a free, no risk consultation. All you have to do is give us a call at (818) 240-1800 or message us through our site.