Home » Los Angeles Injury Lawyers Who Can Help, Come What May

Los Angeles Injury Lawyers Who Can Help, Come What May

The truth is that it’s always important to have a lawyer you can trust. The law is so complex and frankly, it can seem tilted against a regular person just trying to get what they deserve. Those are just some of the reasons that the Los Angeles injury lawyers at our firm are ready to help today. We can work with you through even some of the most difficult, most complicated cases. That way, no matter what happens, we can make sure that you get what you deserve.

Insurance companies can be tough for a person to take on. After all, they have basically all of the resources imaginable. Moreover, they know the law. They know these cases, having an entire team on their side of the best Los Angeles lawyers, adjusters, and more all ready to go. These are just some of the reasons that it’s so important to have a lawyer by your side who understands what insurance companies do and how to beat them.

If the insurance company breaks a promise to you, then we can help you to get the money that you deserve. If they fail to act in such a way as to violate an agreement you’ve made with them, then we can work with you to force them to act. That could come in the form of them paying damages for their actions, and other measures. 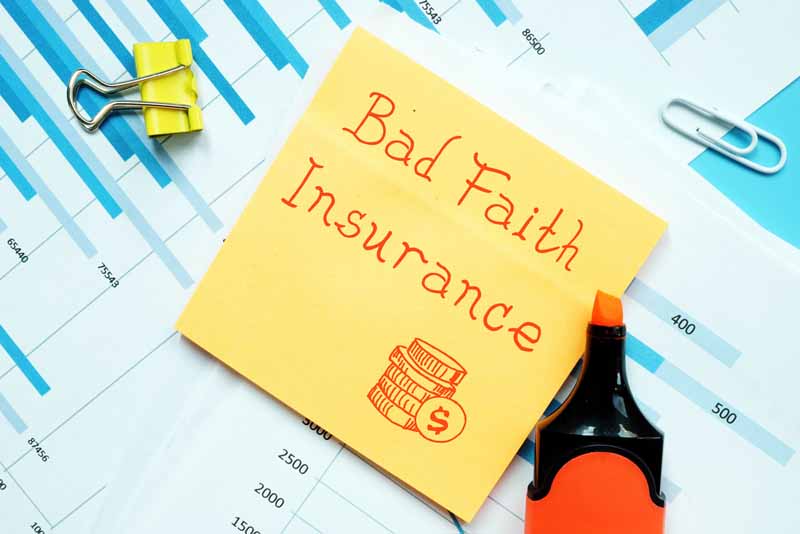 The phrase “bad faith” gets used a lot, and it’s good to have some idea of what it means. Often, we’ll speak to a client about their insurance company, and it won’t be until we lay out some of these factors that a person even realizes their insurance company is operating in bad faith with them. The more you know about these, the more you could realize you have a good case.

For example, the insurance company could refuse to make their payments. That could sound ridiculous to you right now, but it’s the kind of thing that insurance companies do all of the time. They could even limit payments, instead, and just not tell you why. Or, they give some kind of flimsy, untruthful excuse.

Other forms of bad faith that we see often are a lack of some important action on their part. It could be that they perform a lack of an investigation. It could be that they lack any action on your claim. Perhaps you presented them with a claim that includes the proof of loss, and yet, the insurance company failed to affirm it, they failed to deny it, just failed to do, well, anything about it. These are just some of the examples of bad faith that the insurance company could engage in. There are many, many others.

This is one more area where experience is so important. There’s nothing like taking on an insurance company. There is no other client that has this same mix, really, of experience, power, and more. They can swamp a smaller, less experienced firm with all of that. However, here at the LA Injury Group, we’ve been dealing with insurance companies for years. So, we’ll be able to bring that experience to work for your case.

You never want to take on an insurance company on your own. That’s a surefire way to lose, as they’ll be able to use all of their experience against you. Instead, you want to go with experienced attorneys, who have taken on insurance companies in the past and won. That's where we come in. When you’re ready, you schedule a free consultation with us at (818) 240-1800.